Society for the Advancement of Modeling & Role-Modeling

About: MRM Theory > History of MRM: The Story

History of MRM: The Story

Modeling and Role-Modeling originated as a practice model by Helen Erickson (1957-72); was conceptually validated by Mary Ann Swain, Director of Research, The University of Michigan (U-M) (1972-1974); was clinically validated by Evelyn Tomlin during joint graduate studies with Erickson (1975); and subsequently, was tested through the individual and joint work of Erickson, Tomlin, and Swain (1976-1986).

During the early years, Erickson created taxonomies of humans’ inherent needs and developmental processes. The first expanded upon Maslow’s theory of Basic and Growth Needs and the second expanded upon Eric Erikson’s Epigenetic Theory of Human Development. Erickson articulated and tested the Adaptive Potential Assessment Model (APAM) Model during her Master’s degree study and the concept of Self-Care Knowledge during her doctoral study.

After completing her education, Erickson joined the U-M nursing faculty.  Nurses from many settings were increasingly interested in application of MRM theory in practice, research, and education.  Major accomplishments during this time period included:

The title MRM was coined during a discussion among interested U-M doctoral students. Erickson rejected the title, “Erickson’s Self-care,” and other similar suggestions.  She stated that the work should be remembered for what it stands for—listening to the client, understanding the client’s worldview, and basing care on those understandings. She did not want the book to emphasize the author’s name, charisma, and so forth.

The language, Modeling and Role-Modeling was derived from an answer to a question posed by Helen Erickson to Milton Erickson (her father-in-law). She asked, Where should I start? He responded, “Model and then role-model” which was followed by a statement indicating that it was useless to do anything that matters if you don’t start by modeling their world. Only after modeling their clients’ (view of the) worlds, can nurses plan strategies that help them live the lives they want with meaningful roles—i.e. role-modeling. 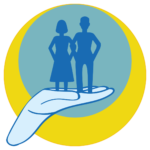 The original logo of MRM, designed in 1981 by consensus among Erickson, Tomlin and Swain, shows nurse and client in an environment that exists in the universe, allowing for future growth and expansion of the paradigm.

Publication of the “Classic” MRM Book

A cohort of faculty, students, and clinical personnel met weekly to discuss clinical, research, and educational issues as they related to MRM. By the early 1980's, it became apparent that sufficient interest existed to take the work to the next level. As Erickson states, I was running all over teaching nurses how to think about the paradigm and use it and the theory, and was constantly asked where they could get something to read about it. Although I’d written quite a bit, but struggled to get the writings published. In the meantime, the model had been adopted by units in the U-M hospital, and rudiments of it would soon be published in the book authored by the Fundamentals faculty.  However, that work didn’t really describe the full intent and scope of MRM. So, I finally got tired of being embarrassed to say that there was minimal information published.  I drafted most of the book in a couple of weeks. All in all, it took about 6 months to write the entire book.

The Modeling and Role-Modeling book was published by Prentice Hall in November 1983. The Fundamentals Department faculty book was published a few months later. Erickson learned from Milton Erickson that the connections between two people were key to establishing a relationship, and, by the late 1970s, had studied and adopted the work of those (Bentov, Watson, Rogers and  Newman) who defined relations within the science of quantum mechanics.

But, Erickson was primarily concerned about healthcare providers’ lack of consideration for, understanding of, and ready dismissal of the client’s worldview; that is the clients’ subjective perspectives that explained what they needed to initiate and support normal healing processes. Therefore, the classic MRM book focused on the natural abilities of the human to grow, develop, and heal and the implications for caring processes. Energetic connections between two people were alluded to but not articulated in this work. (NOTE: Ellen Schultz and Carolyn Kinney advanced these connections in the second book via the alternative perspectives on how to describe nurse-client relations).

Other Modes of Dissemination

Carolyn Kinney, faculty at U-M, declared that MRM was sufficiently important so that efforts should be made to ensure its longevity.

Transitions among Founding Leaders: During fall 1985, Erickson submitted her resignation from U-M, and then relocated to assume the role of Associate Dean, Academic Affairs at the University of South Carolina (UofSC) in fall 1986.

A year later, Kinney accepted a faculty position at The University of Texas at Austin. Tomlin continued to teach Fundamentals at U-M for a few years and then retired and moved to Illinois. Swain accepted an Administrative position at U-M, and subsequently relocated and became Provost and Vice President for Academic Affairs at the New York State University System.

Concurrently, Jenny James became Vice-President for Nursing at Brigham and Women’s Hospital, Boston, MA.  After her stint in Boston, she assumed other high level administrative roles at several other nationally recognized healthcare agencies in the U.S.  At each agency, she consistently implemented either the MRM paradigm and/or the theory.

Other colleagues and former students relocated while simultaneously disseminating the philosophical underpinnings of MRM.

In 1988, Erickson became Professor of Nursing and Chair of Adult Health Nursing at The University of Texas at Austin (UT Austin).  Over the next several years, several neo-MRM scholars emerged at UT Austin and at other educational institutions. These persons developed new knowledge and models that were linked to MRM and expanded upon the basic MRM foundation.

While it is early in the current period of time, there have been several accomplishments.  These will be updated as time passes. Thus far, major accomplishments include the following:

MRM Evolution: From the Person’s Worldview to Universal Consciousness

Today, the logo can be interpreted from both perspectives—micro (i.e., client’s worldview) to macro (i.e., “something greater”) and vice-versa. This requires learning to take a cosmic view—looking from the outer perimeters of a universal energy field while still valuing and using knowledge related to the micro cosmos of the holistic human being in relationship with the nurse.

The evolution away from solely the Person’s worldview to a more Universal Consciousness has occurred over time as a result of close ties among the SAMRM members (and others who learn about MRM) with lengthy discussions and revelations of alternative perspectives. Often, this has occurred when members have courageously peered around the edge of what is to suggest what might be. This has been the goal of the SAMRM retreats and conferences. (LEARN MORE)

Erickson had spoken on several related topics, alluding to universal consciousness and energetic connections among all things (e.g. Compassion, Unconditional Acceptance, and the Cosmic View, 2014; Quantum Nursing and MRM, 2014; Spirituality: Is it the Art of Being? 2010).  However, linking Universal Consciousness to MRM was not addressed until the spring of 2019. Nevertheless, in the second MRM book, published in 2006, writings addressed related concepts and suggested that holism had always been conceptualized as subsystems within systems; each had their own energy fields within sequentially larger fields.